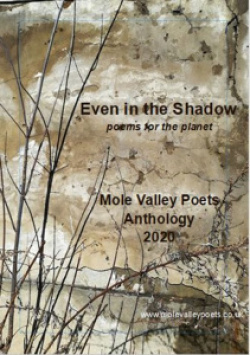 Simon Armitage laid down the gauntlet on the climate emergency, effectively saying that it imbued everything we see or do, and MVP responded by dedicating our 2020 anthology to poems about climate . Entitled 'Even under the shadow - poems for the planet', the anthology includes poems from 13 contributors and covers the range from dire warnings to hope, with some humour in among. Our normal pub based anthology launch was not possible so we switched to Zoom - and acquired some attendees from further afield than is normally the case. A very succesful evening wioth some wonderful feedback on the poems. Copies still available at £6 (which includes both p&p and a donation to CRY - Cardiac Risk in the Young). Cover shown above and an audio of one of the many poems.

In the feedback session and afterwards it became clear that Another on line session would be appreciated, this time with an emphasis on the events of the last few weeks, hence 'Lines from Lockdown' which will be on Zoom on the 15th at 7.30. The format will be readings of poems written during lockdown by members of the group, followed by a feedback and discussion session. All welcome to attend. It's a free session but donations are invited to our local community fridge whose volunteers are working long hours during the crisis and need to keep vans on the road - https://midsurreycommunityfridges.co.uk/product/donate-oneoff/