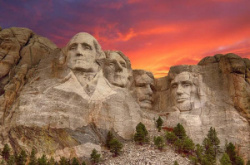 There is a mountain in the Black Hills of South Dakota

Into the shape of four gigantic heads

Sixty foot high lies on the formation of a nation

You were not here at this great lands birth

You stole it and shaped it into white man’s ways

And suppressed the native population unto death

Destroying the Six Grandfathers in your conceit

On the sacred grounds of the Lakota Sioux

The territory was fractured by greedy white men

Chasing their dreams of gold

Now the latest of your kind stands below his predecessors

Claiming that the tenants of this country own the land

Setting fireworks into the sky in celebration

This so called shrine of democracy is a folly

Born of the blood and betrayal at Wounded Knee

If you need monuments to the past erase their faces

Hack the rock with tomahawk and knife

Sculpt new heads on the land they owned

Let the true fathers of this land stand proudly

Where they lived before the migrants destroyed all they had

thanks for the comments and the 'likes'
Brian - history IS history - my points is that it is the history of the taker and we need some balance so that those who are robbed and suppressed are recognised. Otherwise - if the Nazis had won the second world war, they would have been right
Ian

All stole the land from the incumbents. Not saying it's right, but history is history.