'Let the poem go where it wants to go': AC Clarke 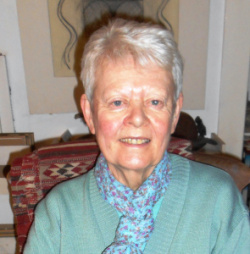 AC Clarke is a poet and translator who has been widely published in magazines and anthologies. She did not concentrate on her writing until retirement in 2002, when she also moved to Scotland. Her first full collection, Breathing Each Other In, was published by Blinking Eye Press in 2005; she now has five pamphlet and five full length collections. Neil Leadbeater talks to her about the latest thinking on poetry translation, how she has been coping with lockdown, and what she has learned about writing poetry.

Let’s start at the beginning. Please tell us something about your background and how you first became inspired to write poetry.

I grew up in a home full of books. My mother was an English teacher and I was an avid reader of anything to hand. She used a series of poetry anthologies for children, The Echoing Green, which had what were really adult poems in them, including many by William Blake from whose poetry the title was taken. I used to memorise these poems and have been writing poetry since the age of seven.

What do you see as being the role of a poet and what does poetry mean to you?

I’m wary of ascribing any role to a poet or to poetry. Roles have differed over centuries and vary between poets. Bearing witness is one important function that a poet or poem may have. Revivifying language is another. To me poetry is a craft using words, as music is a craft using notes. I have always been intoxicated with words! But poetry must also be truthful not to facts but to the author’s vision. Or perhaps honest would be a better word.

When you write your poems, where do your ideas come from?

All over the place. Something I’ve read, very often a historical figure who interests me, an odd scene viewed through the window, words overheard on a bus ...  Curiosity is a useful quality in a poet.

What would you say are the main influences on your poetry and how do they manifest themselves in your work?

I have mainly been influenced by the work of other poets – different poets at different times in my life so I don’t want to name any specific poet. Their work has influenced the forms I’ve tried out, the various styles I have written in. But behind it all is an enduring love of language.

I happen to know that you have set yourself the goal of translating the complete works of Paul Éluard. This seems like a phenomenal task considering the number of poems that he wrote in his lifetime. As a translator, do you think that a translation adds to the original text or takes something away from it?

Neither. A literary translation is best thought of I think as a response to the original text, a kind of conversation with it (a prevalent idea at the moment, I can’t take credit for it). A translation of a poem will only work if the translation reads as a good poem in its own right. Often free versions of the original will work better than more faithful versions. Translation is also a very good way of keeping in the swing of writing (and generating fresh ideas) when inspiration is running dry.

The amount of time you invest in the activities of the Federation of Writers (Scotland) is legendary. Could you please tell us what you most admire and respect about this organisation?

I have always respected the federation’s real commitment to inclusiveness. At the same time it promotes excellence in writing through its competitions and anthologies and its annual election of a makar and a scriever selected from the members themselves. I very much admire the dedication of the hardworking and voluntary committee members who make it all possible and the ethic of service to the writing community which drives them.

Do you think there is a strong poetic movement in Scotland at the moment and, if so, how would you define it?

Movement implies direction and I don’t think Scottish poetry is going in one single direction. I think there is a strong poetic scene here, made up of a multiplicity of diverse strands, from the lively performance scene to the work coming out of creative writing courses at universities in Scotland. There is a growing awareness of, and opportunities for, writing in Scots and Gaelic (the Federation of Writers annual competition now includes these as categories). The annual publication of New Writing Scotland and the work of the Scottish Book Trust both contribute to Scotland’s sense of itself as a nation of writers – not only poets.

What collections have you had published to date and what are you working on at present?

I am lucky enough to have had five full collections published and five pamphlets, two of the latter in collaboration with Maggie Rabatski and Sheila Templeton. I am currently working on a series of pamphlet-length collections of poems about Gala Éluard/Dalí and the surrealist circles she moved in. The first of these is due out from Tapsalteerie press next year, Covid-19 permitting.

How are you coping with lockdown?

Reasonably well. To be honest it has not substantially altered my daily routine, apart from taking still more exercise to make up for the weekly hill walks I normally do with my partner. Not having to keep checking the calendar for events is actually quite a relief. In spite of the absence of events I have about the same amount of time for writing but, sadly, not more!

What lessons have you learned from writing poetry? Do you have any piece of advice to pass on to other aspiring poets?

Lessons: To write what I want to write and to keep writing. To cope with frequent disappointment – but also how often quite unexpected opportunities, such as this interview, turn up.  To let the poem go where it wants to go, regardless of my original intentions for it.

Advice: read as much contemporary poetry of different kinds as you can; don’t be afraid to try out different forms and styles; write what you want to not what you think you ‘should’ write; revise, revise, revise! If a poem is rejected (it will happen!) send it out again; if it keeps getting rejected set it aside for two or three months and then look at it again with a critical eye. Better still, join a critiquing group which gives you honest feedback.

◄ 'Just like a chat down the pub': Luke Wright takes a break - after 100 consecutive online shows

More from Spotlight on Scotland 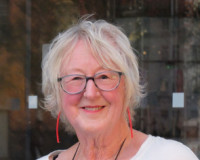 Spotlight on Scotland » 'Try to write every day, even for 10 minutes' - Finola Scott 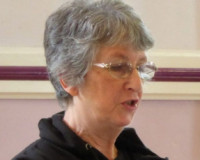 Spotlight on Scotland » 'Poetry is a conversation, not a proclamation – it can’t happen in a vacuum': Elizabeth Rimmer 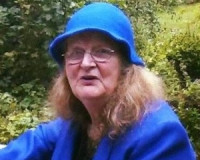 Spotlight on Scotland » 'Poetry consoled me for many disappointments ... a sudden moment of silence and peace'