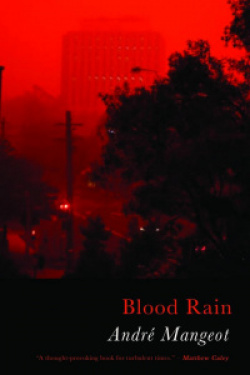 I wonder how many of us can remember being taught about oxbow lakes in Geography? Reading the opening poem in this collection brought it all back to me. I can even recall the drawing that our teacher chalked up on the blackboard in a brave attempt to try to teach us how to calculate the sinuosity of a river. Mangeot is more concerned here with charting our changing world. It forms a perfect opening to this collection of 53 poems divided into four distinct sections of roughly equal length which cover the natural world, friends, fellow artists and family members, global challenges and character portraits.

In April 2014 dust all the way from Africa reached the UK in the wake of an unusual weather pattern prompting the government to issue warnings of very high levels of air pollution across parts of England and Wales. This is the subject of Mangeot’s title poem and also of the photograph on the front cover. Mangeot catches something of its foreboding in his opening lines: “Then, hazing the horizon, silting lungs, it came / by night, silent and unseen, this dust-shroud / blown and shed like desiccated blood…” In many ways these lines set the tone of many of the poems in this book which speak of environmental disaster, religious extremism, radicalisation and political conflict on a global scale. Mangeot is very much a poet of our time.

He is from an Anglo-French family, and grew up in Kent, Yorkshire and Suffolk before graduating from Oxford. He has published two previous poetry collections (Natural Causes and Mixer), as well as two collections of short stories, and written three novels.  For over 10 years he was a member of the poetry collective, The Joy of Six, which performed at festivals across the UK.

Throughout this collection, he is adept at conveying a lot of information within a short space of time. This economy with words is exemplified in the opening lines of ‘Encounter’ where a number of facts are quickly established within the space of five lines:

The doe freezes, as do I

and we face one another:

Concern for the environment and the destruction of our natural world is present in poems such as ‘Wild Honey’ and ‘Memory’ and the majesty of the peaks in the Lake District is celebrated in ‘Heart’ and ‘Helvellyn’. Mangeot returns to the animal world in his poem ‘Foot and Mouth’ which brings into focus the awful spectre of the wholesale slaughter of six million cattle and sheep that dominated our television screens in 2001.

An animal image can be found in the title of the second poem in the collection, ‘Bellwether’ – a term used to describe the leading sheep of a flock. It is a disturbing poem about the way in which one person can lead others astray by inciting them to adopt a collective view of radicalisation and terror: “some called it hate, some called it love.”

The curiously titled ‘Uhtceare’ – an Old English word consisting of ‘uht’ which means ‘the hour before sunrise’ and ‘ceare’, which means ‘care’ or ‘worry’ – describes the way we sometimes lie awake before dawn worrying about the cares of the world.

Pieces addressed to family members include a moving sequence (‘Four Dogs,’ ‘History,’ ‘Ash,’ and ‘Euston Road’) which testify to the poet’s relationship with his father. There are also eulogies addressed to friends such as the Suffolk artist and actress Joanna Dunham. The poet RS Thomas is referenced somewhat obliquely in ‘Hawk’ – a title that I assume draws its inspiration from one of his lines “the silence holds with its gloved hand the wild hawk of the mind”.  I would not have caught on to this but for the fact that mention is made in parenthesis at the head of the poem to St Hywyn’s church, Aberdaron, which is where Thomas ministered from 1967 until 1978.  A further poem, ‘Icehouse’, is a eulogy to the 18th century entrepreneur and philanthropist Ralph Allen who, among other things, is credited with reforming the British postal system.

The power of this book lies in Mangeot’s treatment of the big issues of our time – the rise of populism, terrorism and religious extremism. In poems such as ‘Jerusalem’ and ‘The Odds’ he ratchets up the tension. Just as birds get sucked into the turning blades of wind turbines (‘The Counterpoise’) so human beings get drawn into the whirlpool of terror described in poems such as ‘Jerusalem’ where a suicide bomber pulls the pin in a cafe full of innocent civilians. ‘The Odds’ draws together people from different areas of the globe, and expresses the similarities they share but also that which draws them apart with chilling consequences. Some of them get killed and others escape with their lives intact. This is the lottery we live in … these are the odds.

This is a powerful, thought-provoking book that reflects the troubled times in which we live. However, as “wars continue” and “our planet smoulders on”, Mangeot is at pains to remind us in the closing couplets of ‘Fires’ that “All we can leave / is love, which nothing can burn.” It is a positive note on which to end. Recommended.

◄ 'The many anonymous mute stones in their shade'