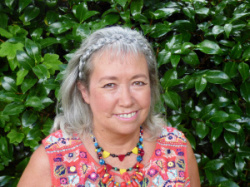 Pascale Petit has won the £1,000 Keats-Shelley poetry prize with her poem ‘Indian Paradise Flycatcher’, in response to the competition theme of Songbird, marking the composition 200 years ago of Percy Bysshe Shelley's ‘To a Skylark’ and the publication in book form of John Keats's ‘Ode to a Nightingale’.

Pascale said: “I entered two poems, added ‘Indian Paradise Flycatcher’ almost as an afterthought, as it doesn’t focus on song but appearance. I am so grateful to the judges for seeing what I hoped was in the lines and for also noticing that the shape of the stanzas mimics its zigzag bob through the air. This poem will be published by Bloodaxe in my next collection Tiger Girl in September, and it’s a great boost to see one of my birds (among the tigers!) have a spotlight.”

About the poem, she said: “I saw several Indian Paradise Flycatchers in Bandhavgarh national park, the tiger jungles of central India, exactly this time last year, in pre-Covid times. I tried to capture what the white male morph is like – what it was like to try to observe him, a scrap of melting snow in the heatwave, with his tail streamers and his jerky flight, too fast moving to capture on camera, then vanished. The temperatures soared, parks flooded during monsoon, drowning many endangered species. Then the world’s forests caught fire. He seemed like a small white melting flag, as if the natural world was declaring peace – or surrender."

The Keats-Shelley essay prize was won by Rosie Whitcombe from Sheffield for ‘Connection, Consolation, and the Power of Distance in the Letters of John Keats’. The Young Romantics poetry prize was awarded to 16-year-old Joyce Chen from London for ‘Senbazuru’, a poem about the paper cranes associated with the bombing of Hiroshima. The Young Romantics essay prize was awarded to Esther Laird from Bath for ‘Can Shelley Help Us  Save The World?’, an essay on the link between Shelley's convictions and beliefs about the natural world expressed in his writing and his life and mankind's current struggles over the  climate crisis.

Founded in 1903, and based in London, the Keats-Shelley Memorial Association supports the Keats-Shelley House in Rome, where John Keats died in 1821. The KSMA purchased the house in 1906. Over the past century, the KSMA have transformed the first-floor apartment into a museum and library dedicated to the Romantic writers, above all those - Keats, Percy Bysshe Shelley, Mary Shelley, and Lord Byron - with strong attachments to Italy. The KSMA is also responsible for maintaining the graves of Keats, Shelley, Joseph Severn and Edward Trelawny in the non-Catholic cemetery at Testaccio, Rome.

The prize judges were chaired by journalist, writer and novelist Simon Barnes, with poetry judges Deryn Rees-Jones, and Will Kemp.

your face a night-

from a past climate

in a heat haze

and when you dip

a flick of flakes

about a sun fuelled

Too fast for my eye

to cool the earth

Once, a crane was caught

in the creases of a small hand

pale and fluttering under thin sheets

And fashioned a family from gauze and crepe

who flew away in fading pulses, shedding

shards of a wish whispered only

by clouds passing in and out,

In and out, bearing rain.

Unfolded, her flesh is blank and

A hand for living