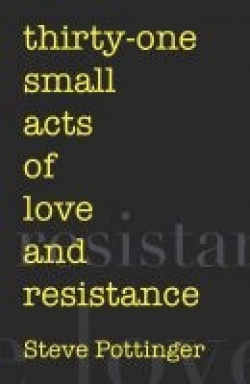 Steve Pottinger’s latest collection covers familiar territory for me. Three of the poems are centred on an incident at Wolverhampton Baths which is where I learned to swim and thereby gain sufficient confidence to keep my head above water.

His poems are brimming with unforgettable characters: a karaoke singer, an overworked and underpaid barman, a homesick Polish immigrant, a gang of scallies, a machinist popping out for a pint, a property developer and a girl from the Star Wars universe who boards the number 42 “for the far-off galaxy of West Brom”.

He gives voice to those who are living on the margins of our unequal society and in poems such as ‘Impulse’ shows us what it means to have a social conscience. His repeated mantra exhorting us to “sing” for the underdog and to celebrate the ordinary things in life is to be found in ‘Mothers’ Day’ and occurs again at the beginning and end of ‘Glass Collector’. The latter is nothing to do with a collector of Waterford Crystal but is in fact about ‘the mouse-quiet collector/of glasses, clearer of plates, wiper of tables”; yet another unsung hero of the humdrum job brigade.

Descriptions of the industrial landscape of the West Midlands are interspersed with poems that address wider issues such as Brexit and universal credit. In the latter, government policy and stark reality are neatly contrasted like opposing forces through the use of non-italic and italic lettering.

Moving further afield, there are a number of pieces, such as the exceptionally powerful, Kafkaesque ‘Desaparecida’ which stand out in terms of their immediacy and overall impact.

As a writer attuned to nature, I particular enjoyed ‘The poet, the property-developer and the Victorian walled garden’ which is written in the guise of an environmental protest poem.

In ‘Parkour’- an urban sport that might get you arrested if you trespass on to private property - Pottinger writes convincingly of “a gang of scallies / in trackies making a din” as they clamber up scaffolding “shattering the silence / of a Sunday afternoon”.  The last line, in which he states that it is just “par for the course” is a clever echo of “parcours du combattant,” the phrase from which the name of the training discipline or ‘obstacle course’ is derived.

Many of the poems in this collection show that Pottinger is essentially an optimist. In his introduction he writes about “our insistence of looking at the stars even when we’re lying in the post-industrial gutter”. In ‘Black Country lunch-break’ he writes:

I’m nothing special, a simple man

they make my heart sing.

He is a master of the strong last line; often it is a line that surprises us and makes us see a poem in a new light.

These are hard-hitting poems salted with a good dose of Black Country humour. They are poems from a poet who is only too aware of the bad press that has been doled out unjustly over the years to places like Wolverhampton. The rot set in as early as the first half of the 19th century when the young Princess Victoria ordered her servant to pull down the blind so that she could be spared the horror of looking at the Black Country, an episode which Pottinger recounts in ‘Trainspotting, 1832’ and then goes to show how this attitude still prevails today in a poem where a machinist called Kevin wonders “when will the cameras come to Tipton?”

Two of the three poems set in the Wolverhampton Baths have titles that are longer than the actual poems and all three revolve around an incident involving a beanie that falls to the floor. They conjure up the phrase ‘at the drop of a hat’, an action that was commonly taken to signify the start of a fight but which, in Pottinger’s hands, offers “hope to humanity” because he doesn’t seek to quiz the stranger on his politics but instead lets him know what has happened so that he can retrieve his beanie rather than lose it … at least, that is, until the third poem in the sequence, where patience runs a little thin.

Pottinger is a perceptive social critic with a great eye for detail. His pace and delivery, which is even evident from the printed page, is just what we have come to expect from this accomplished performance poet.

◄ 'This moment before the splash of lights'

'Having been happily trained for pain, they flash their unharmed smiles' ►

Thanks, Julian. That's very kind. I'm indebted to Neil for such a wonderful review. 😊

Nice one, Neil.
A deft and glowing review of a consummate, popular and powerful performance poet who always has something important to say, and says it superbly; be it in performance, or on the page it seems.
Nice one, Steve.