Competition closes in 19 days, 9 hours. Get details and Enter. 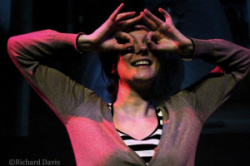 Leading performance poet – and Write Out Loud board member – Louise Fazackerley has won a place on the four-strong shortlist for the Saboteur award for best spoken word performer, it was announced today. Louise was guest poet and co-compere at Write Out Loud's Poetry Jam at the Marsden jazz festival last year. The other contenders are Luke Wright, Susan Evans, and Dominic Berry.

The best spoken word show shortlist is: The Remains of Logan Dankworth by Luke Wright; Raddlesham Mumps by Murray Lachlan Young; The Empathy Experiment by Rose Condo; A Poet’s Guide to the Apocalypse by Emma Ireland, Spike Pike, Sophie Sparham, and Mike Took.

Write Out Loud’s former news editor, Mike Took, is closely involved in each of the last three categories – Script Stuff, A Poet’s Guide to the Apocalypse, and Leamington Poetry Festival.

You can read more details about these contenders, and the other shortlists here. Voting reopens on the shortlists on 19 April. The deadline for voting on teh shortlists is midnight 13 May.

'I just wanted to do SOMETHING': why Luke Wright has been performing nightly during the lockdown ►