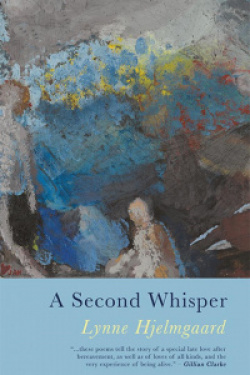 Poetry can surprise us in many different ways. Reading parts of this collection took me back just short of 50 years. When I was a student, I lived in a part of north London that was close to Golders Green. The name always fascinated me; I suppose it was something to do with the alliteration. The first editions of the Penguin Modern Poets were then in print and just before I left London, Penguin issued the penultimate volume (vol.26) that included a selection of poems by the Welsh poet and doctor, Dannie Abse, who lived in Golders Green.

Lynne Hjelmgaard was born in 1951 in New York City and moved to Denmark in 1971. She studied at the Aarhus Art Academy and graduated from Frøbel Seminarium in Copenhagen. She taught creative art for children in various schools and institutions before becoming a full- time sailor. At one point, she crossed the Atlantic in a sailboat with her husband. She now lives in London.

A Second Whisper is a sensitive collection of poems, elegiac in tone, that pay tribute to the loss in 2014 of her mentor and partner, Dannie Abse. The title poem references the sound of a closing door and all that it implied at the time in terms of moving on.

For me, it is the London poems that are at the heart of this collection as they trace moments of recollection and celebrate  a relationship that flowered in later life “when [our] widowed worlds / first connected”. There is no sadness here and no note of regret. Instead there is a calm acceptance of everything that life brings and takes away. Such moments are drawn out of ordinary things such as watching the antics of a wild parakeet seen through a window, sheltering underneath an awning in the rain, or walking alone on Hampstead Heath, a snatch of conversation in a taxi, or spotting a South American bird in Golders Hill Park zoo.

Recurring themes in this first section include the anonymity of urban living captured in poems such as ‘The Couple Downstairs’ and ‘Living in London’ where the neighbours are comically referred to as ‘No-see-ums’ and the consolation of nature, in particular trees, (lime, chestnut, yew, an apple tree that grows through walls, to name but a few) which are associated with loss but also with healing.

In ‘Gainsborough Gardens’, a private road in Hampstead, that is arranged in an oval crescent around a central garden, Hjelmsgaard writes:

I return to the tree that still stands

Why does it thrill me?  Tall beheaded creature –

the more I return the more comforting

To Hjelmsgaard, the tree is “no longer of this world yet in it”. A beautiful image for a lost loved one.

The poems are not all centred on north London; others are set in places as far apart as Wales and Greece, Italy and Denmark, America and the Britsh Virgin Islands. References to the sea and sailing are frequently to be found in the second half of the book.

There are poems addressed to her late husband, who died in 2006, and to her children and relationships from the author’s past in America and Denmark. The change of scene and the host of characters, family and friends, is one of many things that make this collection so engaging. Sometimes an object rather than a person receives special recognition such as in the very fine ‘Ode to a Danish Lamp’:

When I walk down the stairs you are waiting for me.

You’ve had enough of the night and long shadows,

the curtains are drawn. We’re in the depths

of dark November and a silence at 6 am.

My fingers can feel along the wall

until they find your switch.

As a mere human I can’t measure up

to your Nordic metallic cool …

There is a sense of stoic humour in ‘Instructions for the Coastal Walk from Clarach to Borth’ and comedy is present in the delightful ‘Ode to Blue Jeans’ and ‘Afterthoughts’.

The pictures that Hjelmsgaard paints with words are more akin to pale watercolours rather than anything striking in oils, a quiet soundscape of inner thoughts and emotions, and it is this that gives them their strength.