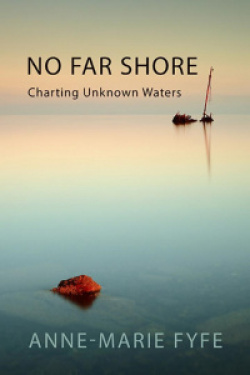 The secondary heading of this literary-travel memoir - a combination of prose and poetry - is ‘Charting Unknown Waters’. And although Anne-Marie Fyfe had no thought of viruses when putting together this work, I found it impossible not to look for clues to our present condition within it.

For this book is at least partly about isolation, touching on those who have never seen the sea, and on islanders who have hardly ever made it to the mainland. The poet also addresses the issue of journeying without maps, which is surely what we are doing now, even if we are forbidden from making actual journeys unless absolutely necessary.

Anne-Marie Fyfe grew up in Cushendall on the Antrim coast, and this book begins with those beginnings. At Cushendall on a clear day she can see the Scottish coast of Kintyre, 14 miles away across the North Channel. She also travels to other sea-edge locations -  Suffolk, Orkney, Wexford, Swansea, Martha’s Vineyard and Nantucket, and Nova Scotia.

Recently, she says, she had begun to realise “how seriously seawater has seeped into, flooded into, so much of my own writing”. Poems are squeezed without fanfare into a cargo loaded with cultural and historical references, including meditations on Homer, Virginia Woolf’s lighthouse, Otis Redding’s Dock of the Bay, Marconi, and that institution beloved of poets as well as mariners, the shipping forecast.

There are poems about being enchanted by maps, and mentions of Captain Flint’s crucial chart included in RL Stevenson’s marvellous Treasure Island, and the cartographical emporium of Stanfords, that “Aladdin’s cave of maps”, in central London. Crucial autobiographical details seep into poems such as ‘Mapping the Unmappable’:

The year I turn eleven

my young father suffers a stroke.

Though he quickly regains strength,

He then watches my mother,

suddenly fearful of an ebbing future,

& drawn to a distant place

with no trail of white beach-stones to lead her back.

The year that, as a family,

we step over the deep’s pencil-line,

far out from dry land,

no charts to show us sea routes home,

home to the known, the familiar:

stepping ashore just once would be a godsend.

She tracks the poet Elizabeth Bishop to Nova Scotia. Bishop spent her early years in her maternal grandparents’ home in a community with the name Great Village, “which I’d always imagined would be very like my own home village on the Antrim coast. As it proved ...” She is able to stay in the same house, and comes to the realisation that Bishop “uniquely understands what’s special about coastlines and islands: remoteness and solitude, and something of the need for the sea. Of course everyone quotes John Donne and No Man is An Island.  But what Elizabeth Bishop actually gets is that maybe we should allow ourselves to be islands some of the time, not simply for the sake of being isolated, but to learn the value of ‘aloneness’. “  We’re certainly getting that chance now.

There are musings on the points of a compass, and particularly the concept of “north”;  on Nantucket and Moby Dick; a visit to the real-life ‘Green Gables’ farmhouse on Prince Edward island; voyages around lighthouses, including the Virginia Woolf one in Cornwall, and thoughts on RL Stevenson, who disappointed his parents by not going into the family business of building them. He must have noticed their imaginative potential, nonetheless.

The poet looks in detail at the tragic sinking of a ferry between Stranraer and Larne in the North Channel in 1953, with the loss of 133 lives. An extra door on the MC Princess Victoria wasn’t in place. Bodies were washed ashore on the Antrim coast for weeks afterwards; they called the sinking “our Titanic”. The final poem in this book, ‘Night Music’, stretches over more than five pages, and includes snatches of old songs and musical notation, and several sequences of Morse code. Typographically, I would have liked to have seen the poetry given more room to breathe on the page throughout No Far Shore.

Such a thought-provoking collage of recollections and references is personal but also universal, and repays and requires a number of readings. Who is not stirred by tidal forces? Anne-Marie Fyfe has published five poetry collections, her first titled, A House By The Sea. But she is also the organiser of Coffee-House Poetry, which runs readings and classes at the Troubadour in London. I see this book, in one respect at least, as an inspirational series of poetry prompts. Why not use it in that way to make your own maritime journeys, as a starting point for imaginative and creative voyages of your own, in this time of lockdown?