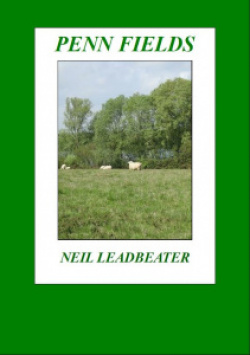 This collection contains a number of poems about what you might call unfashionable subjects – Midlands industrialism, a flight of locks through Wolverhampton, other kinds of locks at a museum, half-inched tools from the jewellery trade, a description of Dudley as the “Venice of the Midlands”. These kind of poems are just up my street. I once found myself on a boat that got stuck in a canal tunnel in Dudley.

Penn Fields opens with recollections of schooldays, and a fond memory of learning Latin via machine-gun style interrogation: “You could feel the bullet go through you. Five seconds / was all you had.” (‘The Firing Line’). I too recall that style of teaching, though somewhat less fondly than Neil Leadbeater. Other poems ponder what became of classmates (‘Me and Wooding, Satchel-light’), a paradise lost (‘Wrottesley Row’), find poetry in a sack race (‘Poem in a Burlap Sack’), and use leaps and bar vaults as metaphors for ambition.

Leadbeater’s Midlands stamping ground includes multicultural allotments, an ‘Alphabetum’ of local industries, his grandparents’ home in Hope Street, within earshot of The  Hawthorns football ground of West Bromwich Albion, the aforementioned lock museum, and ‘Dudley Port’, the “Venice of the Midlands”. Well, why not?

‘Leaving New Street’ has an echo of Larkin’s ‘I Remember, I Remember’, set at another Midlands railway station, but is much more affectionate. The final line of Larkin’s poem is dismissive: “ ‘Nothing, like something, happens anywhere.’ “ Leadbeater’s tone is different:

I lived here once, much as I lived in other towns

but none has brought me back so much as this –

nosing the scent of something gone,

the past we always miss.

These lines reinforce something that I noticed in other poems in this collection; they sometimes have conclusions that transcend the poems themselves. Take “Now the posts are up / men are suddenly boys again / playing for extra time”, that concludes ‘Days when the Schools were Closed’, for instance; or “Why do we always leave it too late / to ever make that call?” (‘Hope Street’).

There is a sequence of poems called ‘Wolverhampton Locks’, an area which I travelled through with a group of friends in the mid-1970s, long before the canal environment became gentrified; when, indeed, it was generally semi-derelict. That was the time of the Dudley tunnel adventure; and so these poems struck a chord with me. Leadbeater remembers a building that “thrummed with the /noise of trade”, a man running, plays around with the canal word “pound”, and at ‘Lock 4’:

much as a barman

would pull a pint

watching the beer fill the glass

up to the level mark

He also records a world-record balloon flight powered by coal gas from a nearby gasworks, a sedge warbler in a reedbed; “the old husk of the city gone”, along with John Brown’s toll house.

There are snapshot poems about the geology and landscapes of nearby Shropshire in the ‘A Short Walk on the Long Mynd’ sequence; and more poems about the wider countryside, its flora and fauna and history, in other groups of poems, ‘Sheep in Twin-Sets’ and ‘Blue Anchor’.

These are crafted, often lyrical and affectionate yet unsentimental poems about places that are often now gone. Their documentary and photographic qualities are valuable and enjoyable; they have the sharp clarity, the flare, of a day’s last rays of sun.