Crawling Out and Falling Up: Dónall Dempsey, Vole Books 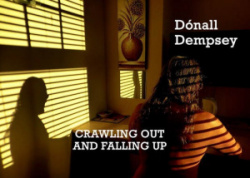 Dónall Dempsey’s exuberant personality and imagination unfold throughout his latest collection. His poetry is inspired not just by romantic views or existential themes; clocks, baking, songs, animals, nature, as well as family, love and death, can all be the subject of poetry. His poetry is in constant conversation with the reader, with nature, and with himself. The title of the collection comes from the first poem that recalls memories of his daughter when she was a little girl:

not trapped in a pothole.

I see it happen

in thought if not in deed.

(‘Crawling out and falling up’)

Her imagination triggers a fantastical upside-down world similar to Lewis Carroll, and yet it is connected to everyday life in its apparent simplicity. Time is one of the themes developed in this collection:

or hung from trees.

too much of it.

As if one small boy

could ever use it all up.

There was no end of it

as if there was only now.

Irish alternates with English, and Italian, in some poems, as in ‘Dónall O’Diomsiagh is Anim Dom!’ (Dónall Dempsey is my name):

And Dempsey itself meaning

His own name is rich with meaning and seems to expect commitment and success, nomen est omen (the name speaks for itself). But there is humour and a sense of lightness in the tone of the poem - self-knowledge as well as self-indulgence. Birds, skies and cloud are recurring symbols that are intended to express a sense of boundless freedom. It may never be utterly achieved but always longed for:

and prayed for hours.

that lay at its feet

The poet is capable of dreaming, though temporarily, through the disenchanted eyes of an adult that wishes to go back to childhood. As Dempsey says in the final notes:

"my child was always teaching me ways to see and to treat the world seriously as the sacred thing it is. She had love for everyone and everything … I did my best to learn from her … she was my mentor."

The sudden death of his brother inspires a meditation on the inevitable frailty of being human, and also triggers a conversation on poetry. What is poetry and how do poems ‘happen’? In a dialogue with his dead brother, the poet says that a poem is “an organic becoming rather than any planned thing. Like a human spider web spun from your self”. Poetry is a physical and mental creation, involving both the body and the mind. Writing poetry is also a way to feel yourself “beloved on the earth”, that is, appreciated, that you count for someone, that you are not a zero.

There are frequent references to William Carlos Williams, Wilfred Owen, Dante, John Donne, and Walt Whitman. Dempsey reflects on these poets and their works from a witty angle, highlighting different themes such as futility, the tragic consequences of war, the contingency and unpredictability of life and love.

He revisits classical myths such as Leda and the Swan where Leda takes the lead, plucks the swan’s feathers, and cooks the swan. In a final twist, “she dines upon//the subtle delicate/breast of swan//served in a creamy/pepper&garlic sauce.//She even has/an extra helping.” The shift of point of view is an intriguing interpretation that undermines the god and vindicates the woman. Special mention must be made for the collection’s untitled haiku, true “gems amongst the titled poems”, as the collection’s introduction has it. Here are some examples:

curled up in bed

with a high green sound

that only a bird could understand

a bunch of squares

in a river of dreams

The haiku reveal and hide, hinting at the themes of the collection that are more extensively developed in the longer poems. Time passes but affections remain and as humans we have the incredible gift and power to give, to empathise with others and to connect with nature.  Dónall Dempsey is a prolific, multi-layered poet who maintains a constant conversation with himself and the world around him. His poems have a sensual, physical approach and provide insights into fundamental questions of life and poetry.

Dónall Dempsey, Crawling Out and Falling Up, Vole Books, £10

'A convenience store with a bike stand, and three smoke-drenched taverns' ►

What a lovely lovely surprise this morning brings me.

Such a thoughtful, considered and considerate review of my bunch of words that goes under the name of CRAWLING OUT AND FALLING UP. Carla calls to them and they come running up to her delighted to see her. The words know that she really understands them and is so aware of what they are trying to say.

Pleased? Oh please! I am more, much more than pleased. She is so kind to my mind and I am so happy now that I wrote them there words and had packed them off in these poems to go see the world and be part of it all.

So what great luck to have run into a Carla Scarano who understands what words do and how they behave when they go to live in books. She has given them a lovely home in this review and I know how happy they are to be here.