The Other Room 7th birthday

Steve Boyland is one of the UK’s most accomplished improvising voice artists. He creates solo works and collaborative projects with leading international practitioners in improvised music, visual and sound art, innovative poetry, dance and performance, presenting his work in gallery, festival and concert spaces around Europe. Recent projects include: Journeying with Restraints (Rathaus, Cologne 2008); Six Interventions for Two Voices, with Maggie Nicols ( Serralves Museum of Contemporary Art, Porto 2010); Songs from a Metal Forest, with Jorge Macchi ( Liverpool Biennial 2012); Niet Normaal, with Bob and Roberta Smith (The Bluecoat, Liverpool,2014); and the Good Eater, with The Aleph (Tate Britain, 2015). He is a current contributor to the Orpheus Project, an ongoing multi-media collaboration with poets Allen Fisher, Scott Thurston, Rhys Trimble, Lyndon Davies, Anthony Mellors and artist/filmmaker Penny Hallas.

Mark Greenwood is a performance artist/ writer originally from Newcastle and now based in Liverpool. He has presented work across the U.K, Europe and the United States. Utilising indefinite durational practice and minimal actions as art forms, Greenwood’s interests lie in anthropomorphic puzzles and inter-textual folds. Mark recently completed a PhD in Fine Art at Kingston University, London. His collected poems White Mice, All Colours were published by onec records in 2011.

Sophie Herxheimer is a London born and based painter and poet. She’s held residencies and undertaken commissions for LIFT, The Thames Festival, Southbank Centre and Transport for London.Exhibitions include The Whitworth and The National Portrait Gallery. Sophie has illustrated five fairy tale collections; created a 300 metre tablecloth to run the length of Southwark Bridge, featuring hand printed food stories from a thousand Londoners; made a life size concrete poem in the shape of Mrs Beeton sited next to her grave; and a pie big enough for seven drama students to jump out of singing, on the lawn of an old peoples’ home. Her poems have appeared in Otoliths, Catechism and Long Poem Magazine, and in several artists' books, that have been exhibited at the Bookartbookshop, The Whitechapel and The Poetry Library. She is an associate artist with Project Phakama and with Fermynwoods Contemporary Art, with whom she’s currently making a book in a forest. Sophie teaches and collaborates extensively. http://www.sophieherxheimer.com/ & http://www.poetryteapot.wordpress.com/

Lou Rowan’s books include The Alphabet of Love Serial, 2015, stories (UK, Reality Street Books); Your Pages Are Not Numbered, 1967, poetry; My Last Days, Superman’s autobiography, 2007; Sweet Potatoes, stories, 2008; and A Mystery’s no Problem, novel, forthcoming 2016. A native of Southern California, he received most of his formal education in the Atlantic states. Living in and around New York City, he earned his living as a teacher, and as an institutional investor. The early onslaught of the derivatives “revolution” drove him to Washington State, to a then-stable pension investment firm, and in 2003 he forwent finance to write full-time. The same year marked the advent of Golden Handcuffs Review, which he continues to edit. His informal education began in the Lower East Side of “THE City,” when the artistic experiments in and around St. Mark’s Church in the Bowery flourished. He is eternally grateful to the English Department at Harvard University for making the formal study of academic literature repugnant to him. 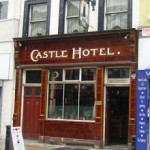 Note: Write Out Loud does its best to ensure the accuracy of event listings but can accept no liability or responsibility if it's just plain wrong.

Use calendar to view other instances of this event and find out when it is next on. Click on a time to view the event on that day and time.

Reviews for The Other Room 7th birthday