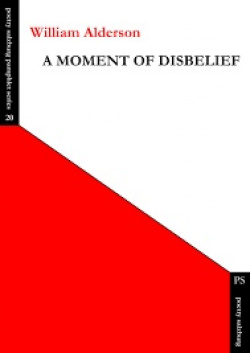 William Alderson has viewed horrors from across the world, before processing them for our consumption. During that process he will have made decisions on which images we can bear to see. But he is no detached media observer. In his introduction to his collection A Moment of Disbelief Alderson says that he has been increasingly politically active over the years and the poems “arise out of various specific experiences relating to war, terrorism, and migration from war”.

In ‘The Mask’ he examines his own work as a news film editor:

I cut these shots that show you half the world.

I cut this gem of knowledge that you claim

Of foreign pain and grief. I know the lies,

Half-lies and truths I hold, withhold, and turn

To set before you, catching hearts and light.

‘Gulf War Photograph’ is, I take it, about the implications of the horrific picture taken from the first Gulf war of an Iraqi soldier burnt to death in his cab on the retreat from Kuwait, on the road to Basra. The image almost defied words, then and now.

‘Kosovo’ is a villanelle, with the second of the two lines – “But armies do what armies always do” – wearily contradicting the first:  “The soldiers have freed Kosovo for you.” Alderson observes in his note on the poem at the back of the book that the “problem with armed peace is that it leaves power in the hands of the armed”.

Alderson has been active in the Stop the War Coalition, which was established shortly after the 9/11 attacks and has campaigned against the so-called “war on terror” waged since by the US and its allies:

We knew the case was made by telling lies.

It took eight years to bring soldiers back.

The devastation left was no surprise.

These words are heartfelt, angry and passionate. They’re not subtle or nuanced, or written at a slant. You feel that Alderson hasn’t got time for all that lark – and that, as a journalist, his urge is to communicate, rather than to mystify.

By supplying notes on individual poems he ensures that his readers get his message. Of ‘Don’t Tell Me You Care’, he says: “I fail to see how aerial bombing and suicide bombing of civilians differ, other than in method.” The final poem in the collection is ‘Manchester, May 2017’, and Alderson says: “In remembering those killed by one bomb, it is all too easy to forget those killed by other bombs, and the responsibility our political leaders have in creating such levels of hatred and inhumanity.” He does use metaphor when he needs to, employing the seasons to signify a warning to the powers-that-be, and his belief that

There is never a moment when autumn begins,

Never a day when summer ends.

The sun on which your power depends

Will lower and weaken, for winter always wins.

A We Shall Overcome poem, if you like. And one that, like the entire collection, is infused with passion, belief, and certainty. Poems to carry with you on an anti-war demonstration, feelings that are admirable. William Alderson worked in TV news for 25 years, and yet retains a sense of conviction, and a lack of cynicism – which is some achievement.

'Slim as an eel but a solitary glider, a pilot without bombs or weapons' ►