Steev likes to keep alive rhyme schemes such as the Rondeau, the Pantoum and such like and is sad that rhyming poetry has almost been abandoned to the comedian/performers these days. Born at St Bartholomews hospital, Steev Burgess grew up in the Clerkenwell district of London where he was one of the founder members of the Y Tuesday poetry club (upstairs at the Three Kings in Clerkenwell close EC1) in 2006. As well as being a poet, Steev has had exhibitions of art in many galleries in many countries and also writes song lyrics in collaboration with John Hassall of the Libertines for his second band, The April Rainers.

I AM SPRING I am Spring, he said The egg and the eye am I, Frisky, footloose, fancy three Seasons come and go then, Me, Times own gold medallion Leading sap again to stem For all those sweet lithe limbed soubrettes Lifting up their gentle hems. I am Spring, she said, I fly above the chanting spires My sun warmed wings bring twigs and sprigs To weave nests in the briars, Everything is rising now - The May pole and the people, Pollen, plants and spores will dance With Icarus and sea-gull. I am Spring he said The green and Easter rising The martyr and blood sacrifice Immortalised in writing, The Catholic and pagan soul The peacock's tale, the greater whole The sated thirst the death bell's toll Makes life real and exciting. I am Spring, she said, Into the world I scramble, In lavender from Lavenham Down railway lines I amble, Gambling with the lamb and hare At riotous rave or country fayre I get into their hearts and hair, By starlight or by candle. I am Spring he said, Feel my rejuvenation, I tup and rut flutter off In heart soaring elation, Those sunbled crumbling Autumn dyes Are now the glint inside my eyes, I laugh, I pant and sometimes sigh With each new sensation. I am Spring, she said - Earth, take the dead and keep them And I will wave with golden corn From Soham down to Reepham, Where under petals Bees are found, I shimmering spears the sun rains down, Where flowers turn the light to shades Of colour in the beds you made, Turn me softly with your spade - For I am young, she said. S Burgess GASLIGHT AND GIN It’s not about I Or at least not by name I’m just a custodian Of this ancient flame, I’m a valet of verse At the right hand of rhyme A porter of Poetry A menial of meter and time. So button up your pintle Your pillicock pistol Your snake or you quimstakes We need not your Bristols Or go and be blowed Or please take your ease, I came here for meter And poetry, see? So write us a Rondeau Prepare a Pantoum, Let your tongues roll and rage Through our candle lit room, Shake loose your shadows Your Sonnets and leaves, Weave us your wisdom With roots deep as trees. And lean lygophiliacs Into the night, Let your lithe limbs divine The Fleet flood of delight, But remember the passing Of people worn thin Who trod this same pathway Of poetry, Gaslight and Gin. We’re not acting out An American dream, Our Greenwich is nautical, Green as it’s mean, The tides are a changing It ebbs from much higher So let’s see an ark built With words and desire. Answer the phoney The fake Pharisees, There’s no fashion in poetry Just pedigree, But don’t act pedantic, Encourage the young To give vent to their feelings With tremulous tongues. So light up the candles Stand up and recite We’ve no room for drum kits or strumpets tonight, Let our songmongers sing On our tuppeny stage, Bare your duende, That which a drink may assuage? So raise up your glasses Of gold, Black or green, Spout poetry peacocks Your plumes you may preen, But hear too of darkness And demons within, ‘Cause I come from a dark world Of poetry, Gaslight and gin. Fear not be audacious Light up my ears, With verse so splendacious It soars and it sears And waggles our senses Perceptions and feelings, Let the shadow of lips Cast their words on the ceiling. Point pens with a purpose Anoint now your nibs, With the blood of your heart and With air ‘neath your ribs, Read words wrote on napkins Or scalpel scarred skin, As we come from a sharp world Of Gaslight, And of Gin. S Burgess St Vincent of the Oils I am talking to the dead again Who are talking to the living, Just as some of those swirling stars Were winking at Van Gogh From beyond their own black hole. Thanks to you, A man will always be walking The road to Tarascon, Departing Lamartine But never really leaving. He doesn’t get anywhere But he doesn’t get nowhere either. Deal. You never got a favourable hand, But you used them well. I mean, who in Arles would have thought That you, the Absinthe sodden outcast, The stinking brothel creeper, Would be viewed a Saint, Expressing the terrible passions of humanity In thick masculine daubs of blood red and bottle green, Under citron lights swirling In the cafe of the night? The reaper in the cornfield did not scythe down the artist, His brushes wave like two fingers from the grave. Vincent, you have granted a thousand painters and poets (of variable ability) The belief that there could be a better life after death. Sometimes, when the sun is shining and the birds, singing It seems almost romantic. We plant our work like sunflower seeds And depart. S Burgess ODE TO THOSE SALLOW KITTENS A blizzard of the brightest light The Sallow Kittens gather round These blanching butterflies of night Lost when they’re found At distance an amorphous mist With wings tinted by sunsets glow In bridal white like ghosts they list Lost in the snow The myrmidons melancholy Easily smudged as soft as dust Dark eyes confused by what they see Share my distrust Purr on with mournfull moonstruck wings Addicts to every lamplight’s dope Lithe and modest velvet things Give me such hope S Burgess

Steev burgess reading at the Catweazle in Paradise.jpg
( 0 comments ) 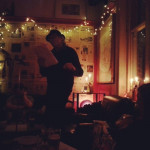 Steev Burgess on the radio.
( 0 comments )