In association with Wolverhampton Literature Festival, Write Out Loud is proud to organise the WoLF Poetry Competition, open to poets across the globe. The theme for this year's competition is 'out of darkness...'. Poets may interpret this nod to the city's famous motto 'Out of darkness cometh light' as literally or figuratively as they wish.

The following prizes will be awarded:

The prize-giving will take place as part of the WoLF festival over the weekend of 26-28 January, 2018

The fee to enter is £4. If multiple poems are entered in the same submission, £10 will be charged for three poems and then £3 for each subsequent poem.

Poems must be no more than 40 lines in length.

Results will be announced on 20th January 2018. Shortlisted poems may be published in a WoLF anthology. The winning poets will be invited to read their poems at Wolverhampton Literature Festival over the weekend of 26-28 January, 2018. 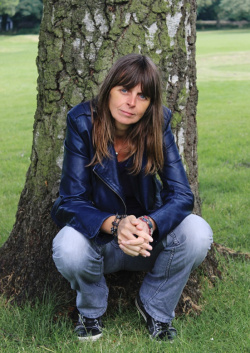 Wolverhampton poet Emma Purshouse has recently been named as one of the Creative Black Country’s 100 masters for her work as a free-lance writer and performance poet. She performs her work at spoken-word events and festivals across the country and has supported John Hegley, Carol Ann Duffy and Holly McNish.

A collection of her children’s poetry ‘I Once Knew a Poem Who Wore a Hat’, (beautifully illustrated by Catherine Pascall Moore) won the poetry section of the Rubery Book Award in 2016. Emma has also been shortlisted for major competitions with both her prose and poetry, including the Mslexia unpublished novel competition, and in October of this year she won the ‘Making Waves’ spoken word prize.

Emma has collaborated with poets Iris Rhodes and Marion Cockin on a shared collection, ‘The Nailmakers’ Daughters’ (Offa’s Press) while a CD of her work, entitled ‘Upsetting the Applecart’, was released by Offa’s Press in 2010.

Emma has edited several poetry anthologies, and has an MA in Creative Writing from MMU.

A note from Emma on judging the WoLF poetry competition

As a Wolverhampton poet, I’m especially delighted to have been asked to judge the WoLF poetry competition. I’m looking forward to reading all the entries, and I’m very excited to see how people will tackle the theme in a variety of ways. I’m hoping that people will use traditional poetry forms and put their contemporary stamp onto them. What I’d like to find in a winning poem would be acutely well observed detail, coherence, and an original voice. I will be searching for those poems that engage with the reader, those poems that people will want to read again and again.

1.  Entries to the competition must be made online at www.writeoutloud.net.

4.  The competition is open to anyone, with the exception of members of the core team of Write Out Loud.

5.  Poems must be your own unaided work, and on the theme of ‘Out of darkness...’. You may interpret this theme as literally or figuratively as you wish.

6.  Poems must be in English, and no more than 40 lines long. They must not have been previously published (either in print or on a website), nor should they be currently submitted for future publication elsewhere.

7.  We can’t amend poems after they’ve been submitted, or refund fees paid.

8.  Copyright of the poems remains with the author, but Write Out Loud reserves the right to publish successful entries in the competition anthology, and on the Write Out Loud and WoLF websites.

9.  Information on how to enter will be available on the Write Out Loud website in advance of the opening date of the competition.