by Poetry in Translation Group 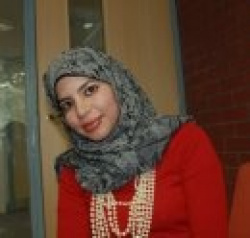 Write Out Loud's Paul Blackburn approached Fatima Al Matar (pictured), a poet from Kuwait currently living in Coventry, with proposal for a Cross Cultural Poetry project.  As a result of discussion, two blogs were produced which should be read together (this one first).

Initially, she worked with English poet, Fred Holland, to produce a version of his poem "Unsuited" in Arabic, and versions of the poems in both languages can be found below.

More importantly, she then explains the problems she encountered with the translation process with particular reference to differences between the two cultures.

After further discussion with Paul, for the second blog she took a poem, 'I wish I can live life' by Abu Al Qassim Al Shabbi, a Tunisian Poet (1909 – 1934), and translated it into English. She then used this translation to develop some of the themes identified in this blog and describes the different styles of Arabian poetry. See http://www.writeoutloud.net/public/blogentry.php?blogentryid=9760

Alas we are not suited, you and I.

It would not last a minute, not a day

would pass but I would hate you, make you cry,

or strike you in some bitter quarrel, say,

about the way you laughed or ate or walked,

or I would be revengeful, jealous, dumb,

no friends would come, and if we talked,

it would be coldly over bills or some

decision to be made against our will

how once we loved when that was still

a joy, but only to destroy it all.

Better to leave me now, while this desire

Challenges in translating an English poem into Arabic:

For this cross cultural poetry project I have asked my dear friend and poet Fred Holland for permission to translate his poem ‘Unsuited’ included in his poetry collection ‘In Guarded Conversation’. Here are some of the difficulties/challenges I was faced with:

3. The forming of a sentence:

Isobel, thank you for your comments, yes obviously poetry is born from the poet's experiences and ideologies and thus reflect his/her culture whether conservative or liberal it will have some indication in the poem...
I agree with you, listening to french people speak makes me melt! I am learning the language and am constantly blown away by it. Finally, a recording of my voice reading the poem will be posted by Paul soon.
thanks again to both of you for showing interest.

I left a comment too, but I'm not sure where it is. Is there another 'place' on here? I also complimented Fatima on her efforts, and her inclusive notes.

Following a comment from Paul, I now realise that the footnotes are the most important part of this blog; the understanding of cross cultural differences that make translation so difficult.
Having read through those more thoroughly, I can see that the Arabic version must be very different indeed.
What struck me in particular was the fact that the impact of a relationship on outer friendships was not something that would be considered or identified with, within the arab world.
This led me on to thinking also about the differences between the sexes and of just how women and men interract within both cultures. This must have a huge impact on the nature and validity of such translations. Thank you for bringing this to our attention - fascinating stuff.

This is an interesting project. What a shame you can't get more feedback on how well you translated it. I have recently written something in French which I might post at some point. It is nigh on impossible for me to translate it into English in a poetic yet meaningful way though. Or maybe the poem/song is naff to start off with. French is such a beautiful language that you could listen to the ingredients on a can of dog meat and not fail to be moved. You should perhaps consider attaching sound to translations like this, so people can at least hear the flow.