As blue as robins' eggs

Though time's chasm opens before my sight,

And the vertigo returns with the Lapis Lazuli,

I will devote some time to resurrecting the lived poetry

Of the Byzantimes, Persians, Armenians, Assyrians.

Each civilization alloted supreme value to the blue of lapis lazuli.

As blue as blue robins' eggs, it produced ultramarine, a pigment of supreme rarity and value.

In pursuit of the blue, Moses of Khorene was born about A.D. 404,

A proud, educated Armenian: a student, a poet, a linguist and a singer of songs.

Educated in Athens, one of those Armenians with an intense awareness of the value of the blue

Moses worked later in the libraries of Alexandria and Palestine,

He sojourned to Rome, Athens, and back to Byzantium,

Returning to Armenia about 440 Moses retired into solitude.

Until it happened perchance that the Catholicos Bishop

While travelling, alighted at a certain poor village,

He was entertained by the peasants,

An old ragged man was urged also to say something.

At first he excused himself on the plea that he was a stranger,

But, to the surprise of all present,

He recited an impromptu ode, greeting the Catholicos with pieces of lapis lazuli

Moses disclosed his true identity, as Moses of Khorene,

The man with the bluest of lapis-blue eyes.

At first the Catholicos was incredulous,

But, on a careful examination of the old man’s eyes,

He recognised him as his former fellow-student,

Whereupon he burst into tears and held Moses closely in a long embrace. 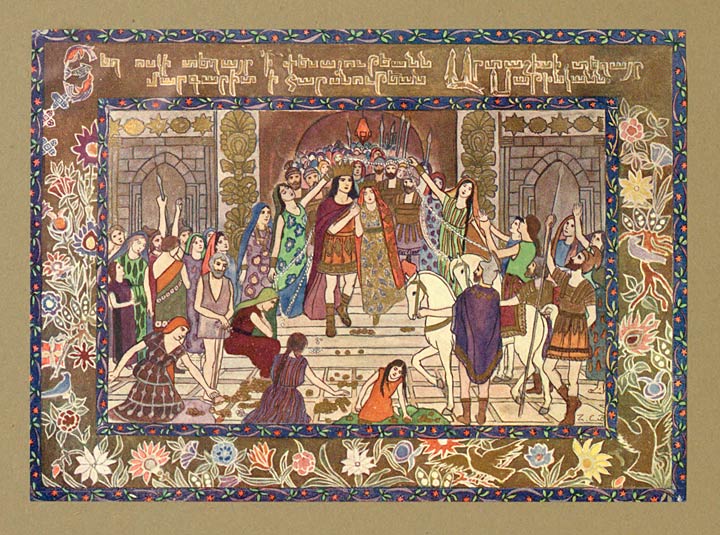